With the Paris Agreement in place, factories all over the world need to rethink their working processes to reduce CO2 emissions. This includes rethinking the way large factories are cooled and ventilated. Adiabatic cooling provides an environmentally responsible indoor climate solution, yet many people still seem to have concerns regarding adiabatic cooling. Most of these concerns stem from ignorance or inexperience, with factory owners and installation mechanics failing to think differently from the climate solutions that they are familiar with.

In this blog, we have listed and resolved eight of the most prevalent concerns, or better yet misconceptions, about adiabatic cooling. By doing so, we hope that people will change their perception of adiabatic cooling and see that this indoor cooling solution helps us work toward a carbon-neutral climate.

One of the more prevalent concerns about adiabatic cooling on an industrial level is that it would create a subtropical indoor climate within the factory, with high levels of humidity and condense formation in and around the workplace. This concern derives from the fact that some home air conditioners not only cool but also humidify. These air conditioners pump humidified cooled air through the house, but as there is usually no air outlet to extract the humid air, the moisture cannot escape. Consequently, the indoor climate becomes damp and humid. This is, however, not the case for industrial dual-stage adiabatic cooling. Dual-stage adiabatic cooling works on the principle of ventilatory cooling. Fresh air is pumped into the area, absorbs the heat and is then extracted through an exhaust. This way, the moisture in the air doesn't get the chance to build up indoors.

Adiabatic cooling is far from unsustainable. In fact, substantial energy savings are made possible with adiabatic cooling. The technology relies on the natural principle of water evaporation to cool fresh air. Only 1 kW of electricity is needed to provide up to 40 kW of cooling power. This so-called EER (Energy Efficiency Ratio) is a factor 10 lower with traditional cooling systems. On hot days, the power consumption of adiabatic cooling hardly increases, and there is no high peak power. All in all, adiabatic cooling uses a lot less electricity than mechanical cooling.

Some may raise the concern that an adiabatic cooling system uses a lot of water to cool. Yet it takes only one cubic metre of water to generate 695 kW cooling power.

Of course, an adiabatic cooling system uses not only electricity but also water in its cooling process. However, the costs for water usage are minimal and do not weigh up to the extreme benefits of the electrical costs.

Some tropical countries have such a humid climate that adiabatic cooling cannot provide sufficient cooling power. In Europe this practically does not occur, only shortly before or during heavy rainfall, making it less favorable for only a few hours a year. In addition, there are only a few humid days per year in which an adiabatic system cannot cool as effectively. These humid days usually occur during spring and autumn when temperatures are still relatively low, and the humidity is only high for a couple of hours during the day. For the rest of the year, adiabatic cooling functions as a highly effective and sustainable indoor climate solution.

Concern #5: Adiabatic cooling can only cool down to a few degrees below the outside temperature.

Indeed, if it is 40 °C outside, a direct adiabatic cooling system usually cannot cool the inside temperature down to 22 °C. Previously, such temperature differences could only be achieved with a heavy mechanical cooling system, resulting in extremely high energy consumption.

The new two-stage adiabatic cooling technology can cool up to 7 °C deeper than the old direct adiabatic systems. This has a significant effect on the indoor temperature with the additional advantage that the two-stage technology brings in up to 60% less moisture, creating a comfortable indoor climate.

An example: without an effective cooling system, temperatures within a factory can quickly rise 5 to 10 °C above the outside temperature. Not only due to heat radiation from outside, but also due to the often high internal heat load of, for example, production systems. With a two-stage adiabatic cooling system, the indoor temperature can be brought to a comfortable level, usually around 22 °C.

As adiabatic cooling uses fresh air to cool, and the outside air contains all kind of bacteria and fungi, some raise the concern that this process is unhygienic. Especially because the pad through which the air flows gets wet in the adiabatic process.

Most adiabatic cooling systems have a pad made of cellulose, which of course is the ideal breeding ground for bacteria and fungi. Yet these pads are completely dried every 24 hours, resulting in a total bio-shock, and everything that nestles itself in the cellulose dies. The pads that Oxycom uses for her adiabatic system are not only dried completely every 24 hours but are also made of aluminium instead of cellulose. The aluminium fins in the pad are coated with an antibacterial silver ion layer which prevents the growth of bacteria and fungi even more. 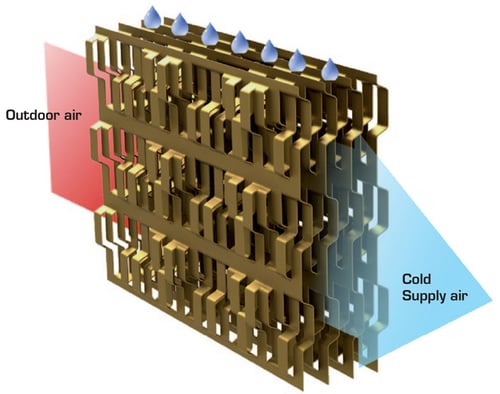 Legionella bacteria naturally occur in soil and water and can cause a horrible lung infection if a person breathes in tiny droplets of contaminated water. The legionella bacteria can grow in water with a temperature between 20 °C and 50 ℃, especially if this water is stagnant. Adiabatic cooling works as an evaporative cooling system in which water evaporates and does not atomize. With some adiabatic cooling systems, such as those used in cooling towers, problems can arise as they spray or atomize water in the air to cool. During the adiabatic cooling process used by Oxycom, however, no drops or aerosols are released. This means there is no risk of legionella, even if the bacteria are present in the water.

Concern #8: Adiabatic cooling is too complex

Even though adiabatic cooling has been around for centuries in its most basic form, most people are unfamiliar with the possibilities that new adiabatic technologies can provide. And unfamiliarity often leads to the reluctance to try something different. However, our current global climate situation is asking us to try something different and to find innovative ways to reduce our carbon footprint.

At Oxycom, we are here to help you along the way. We have a wide range of tools to calculate precisely the external and internal thermal load of a building, the required capacity for cooling and ventilation, and the associated operational costs. Together with your experts and the local installation team, we map out how to best, and most efficiently integrate the air supply and removal into your buildings.

In conclusion, in practically every climate of the world, two-stage adiabatic cooling is a suitable solution for the indoor climate. Furthermore, it provides an environmentally responsible way to create and maintain a healthy and comfortable indoor climate in large buildings. In this age of growing environmental concern, it is Oxycom's goal to deliver an environmentally friendly solution for a healthy indoor environment that makes people feel comfortable and productive, every day of the year. For more information, please contact one of our experienced adiabatic cooling specialists.

“I believe it’s time for sustainable climate systems, due to climate change and the need to reduce the global carbon footprint. It’s wonderful to contribute to these goals with the entire Oxycom team.”

Rethinking ventilation: how to upgrade your existing AHU-system

Gain insights about the industry and in-depth knowledge.

New Why ventilation and humidity are important against spread of coronavirus