Water is one of nature’s most powerful refrigerants. Oxycom systems make maximum use of this unique property and evaporate water to generate cooling. We do this in several innovative ways. In this blog, we explain why water is an excellent alternative to the ozone-depleting R-22 refrigerant in conventional air conditioning and how water-based cooling works. Furthermore, we’ll show statistics on sustainability benefits and saved CO₂ emissions.

Refrigerants function as the working fluids in air conditioners, heat pumps and refrigeration systems by absorbing and releasing heat as they undergo continuous phase transitions between the gaseous state and the liquid state in a closed refrigeration cycle.

R-22 (a hydrochlorofluorocarbon or HCFC) has long been the most widely used refrigerant in air conditioning systems, but is nowadays increasingly being phased out because of its ozone-depleting behaviour. Instead, chlorine-free replacements have gained popularity, most notably hydrofluorocarbons (HFCs), such as R-410A, R-407C and R-134a.

Water is also one of the many available refrigerants, having its own unique properties and refrigerant number (R718). Strictly speaking, evaporative cooling technology also uses water as a refrigerant, but instead of repeatedly being evaporated and condensed in a closed-cycle system, it is continuously being evaporated hereby cooling and humidifying a stream of air.

Water is highly suitable for this purpose, as it is one of nature's most powerful refrigerants, with an exceptionally high latent heat of vaporisation (2501 kJ/kg at 0 °C). As such, evaporating water at a rate of 1 L/h generates as much as 695 W of cooling power.

Vapour compression air conditioning is the most widely used technology for air conditioning, heat pump and refrigeration systems used for residential, commercial and industrial purposes. These systems consist of four main components through which the refrigerant is pumped in a closed cycle: 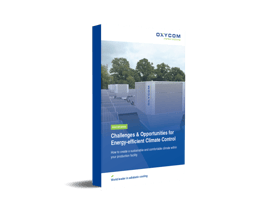 Download our whitepaper “Challenges and Opportunities for Energy-Efficient Climate Control”, and discover how you can create a comfortable and sustainable indoor climate within your production facility.

Before we look at the difference in energy-efficiency between evaporative cooling versus conventional cooling, let’s take a look at what it costs to generate energy. There are various types of fuel available that power plants can use to generate electricity. For example in the Middle East and lots of other parts in the world, they use oil and natural gas, hereby emitting vast amounts of CO₂. Power plants also require water for the generation of electricity, where it is mainly used for cooling. For instance, oil-driven power plants consume 2.33 litres of water and emit 0.76 kg of CO₂ per kWh of generated electricity.

Comparative calculations have been performed for both evaporative cooling and conventional air conditioning technology providing equal cooling power. Evaporative cooling with an arbitrary evaporation rate of 1 litre of water per hour has been chosen as the baseline, corresponding to 695 W of cooling power. Electricity is assumed to be generated in oil-driven power plants. Water intended to be used in evaporative coolers should preferably be of potable quality. Typically, desalination by means of reverse osmosis requires about 4 kWh of electrical energy per m³ of water. 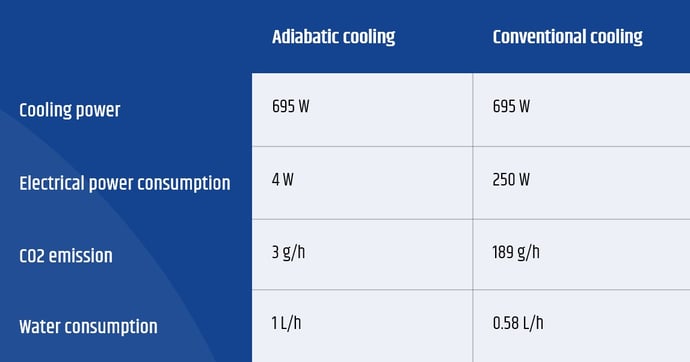 Regarding the pure cooling aspect only, using evaporative cooling technology instead of conventional vapour compression air conditioning technology reduces the electricity consumption and CO₂ emission by more than 98%.

Find out how we use water as a refrigerant for our innovative IntrCooll:

Is indoor air pollution up to five times more dangerous than the outdoors?

What types of indoor cooling (AC) options are there for production facilities?

Start your journey to Zero!