Climate change is the biggest threat that we are facing today. Every proposed pathway to remain below the (scarcely) tolerable level of 1.5 °C warming invokes a portfolio of solutions.

In 2011, a team of researchers from the University of Cambridge calculated by how much global CO2 emissions would be reduced if we maximized all existing technologies to make the end-use systems for energy as efficient as possible. They concluded that we have the technological capability to reduce the energy we currently use by 73%, while maintaining our current output of services, just by improving efficiency.

According to US Energy Information Administration (EIA), more than 60% of the energy used for electricity generation is lost in conversion, when energy is transformed from one form to another and moves from one place to another. If we also optimized conversion devices, we would need 85% less energy through energy-saving measures and energy transport or to avoid energy transport (solar energy locally generated).

Energy consumption is by far the largest producer of greenhouse gasses, responsible for more than three-quarters of global emissions. 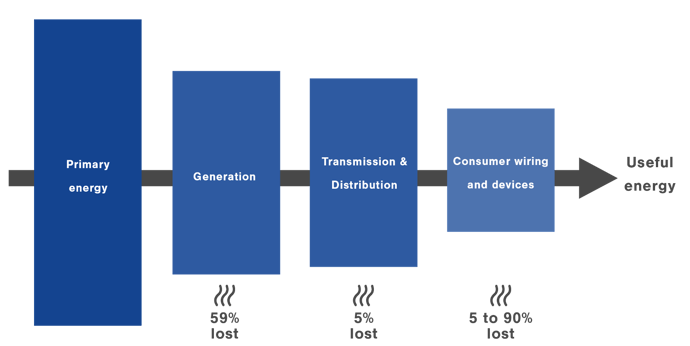 According to UNEP, climate-friendly cooling solutions could avoid as much as 460 billion tonnes of greenhouse gas emissions.

As global temperatures rise and heatwaves become more common and more deadly, the demand for air conditioners is rapidly increasing. Traditional air conditioners use more electricity than any other appliance in buildings. They consume 10% of global electricity and leak potent planet-warming gases into the atmosphere.

According to recent research conducted by the NREL and XEROX PARC, 1,950 million tons of carbon dioxide are released each year from the energy used to power air conditioning, out of which 531 million tons are released from cooling the air and 599 million tons from removing the humidity. An additional 820 million tons come from the leakage of refrigerants and from greenhouse gasses emitted during the manufacturing and transporting of the air conditioner units.

The International Energy Agency (IEA) estimates that global demand for space cooling will more than triple by 2050. The growing cooling demand is “one of the most critical energy issues of our time”, according to the IEA’s 2018 report, which demands improving the efficiency of air conditioners. A transition to climate-friendly and energy-efficient cooling, however, would avoid greenhouse gas emissions and allow an increase in cooling access that would contribute substantially to the Sustainable Development Goals (SDGs).

Evaporative Cooling: One of the silver bullets to tackle climate change

There are different silver bullets to solve the issue of climate change and one of them is evaporative cooling. Thanks to the enormous power of water, it is possible to supply the cooling in an efficient manner. Evaporating 1 m3 of water produces up to 695 kW of cooling power while Traditional AC technology would demand at least 250 kWh to deliver the same cooling power.

Read more in our blog: Water as a refrigerant 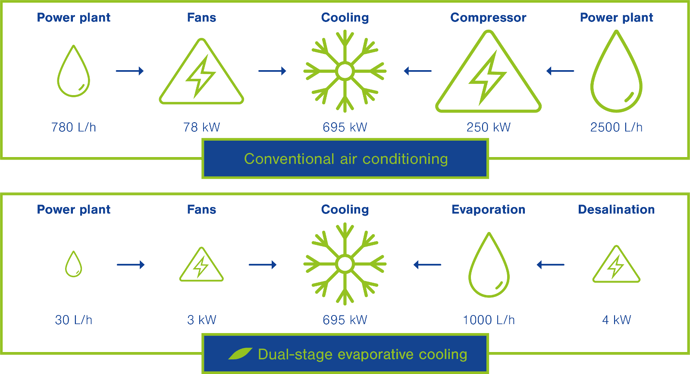 A common challenge faced by production facilities today is how to create an indoor climate that can break the tricycle of climate change. Oxycom’s patented two-stage evaporative cooling system, IntrCooll, can cool up to 30°C below the outside temperature while using 90% less energy than traditional air conditioning.

IntrCooll, uses 100% fresh outside air during free cooling and cooling. During spring, winter, or fall, the system uses the outdoor air smartly to ventilate and cool without using any energy at all. When the outside temperatures increase beyond a temperature of 18-22°C, the IntrCooll system switches to two-stage evaporative cooling; the outside air is cooled in the first stage using cold recirculation water and further cooled down by direct evaporation in the second stage. IntrCooll delivers up to 40 kW of cooling power with 1 kWh of electricity. IntrCooll EER (Energy Efficiency Ratio) can go up to 40. This so-called EER is a factor 10 higher than traditional cooling systems.

During winter, the IntrCooll system can be enhanced using the Heat Reclaim module. This module reuses the residual heat that is generated from machines, processes, heating, lighting, and people, mixes it with filtered fresh air and next to that it filters the indoor recirculated air. Thus supplies the production hall with preheated clean air.

For its world-class energy-efficient cooling, heating, and ventilation technique, Oxycom’s IntrCooll has also been awarded the Energy Globe Award 2020 for 87% savings on energy costs and CO2 reduction in KIEFEL Packaging GmbH hall in Upper Austria. In addition to this, it is important to mention that Oxycom's IntrCooll units cool only with the power of water: no harmful chemical refrigerants are required.

Discover how to create an energy-efficient, comfortable and sustainable climate within your production facility in our whitepaper Opportunities & Challenges for energy-efficient climate control.

Would you rather directly speak to an industrial indoor climate specialist to discuss your challenges, please fill free to fill in the form below with your request. We are happy to help.

"Increasing the visibility of Oxycom online makes me feel good because our products reduce the global ecological footprint."

Step away from gas: 4-point plan for your factory

Cannabis: how to get the best quality and yield from your greenhouse crop

Start your journey to Zero!